The basics of Vim 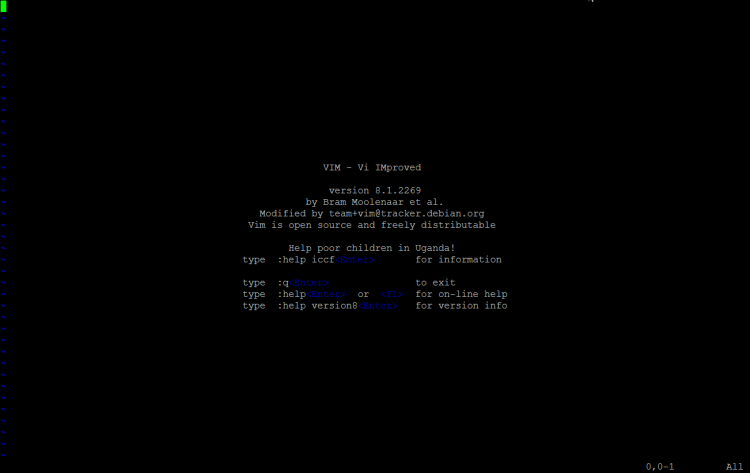 Vim is the editor of choice for many developers and power users. It’s a “modal” text editor based on the vi editor written by Bill Joy in the 1970s for a version of UNIX. It inherits the key bindings of vi, but also adds a great deal of functionality and extensibility that are missing from the original vi.

What the heck do we mean by modal? When you’re using most word processors and text editors, the alphanumeric keys (i.e., a through z, 1 through 9) are only used to input those characters unless they’re modified by a control key. In Vim, the mode that the editor is in determines whether the alphanumeric keys will input those characters or move the cursor through the document.

For example, many text editors and word processors require you to use the mouse to click a menu item or icon, or use the Ctrl-s hotkey combination, to save a file.

In Vim, you can save a file without your hands leaving the keyboard, and sometimes without even leaving the home keys. From Vim’s insert mode, hit Escape and then :w. That’s all. More on that later.

If that all sounds complicated, it’s not–but it can take a little getting used to, like driving a manual transmission instead of an automatic. So, why would you want to learn Vim? Even though Vim is my favorite editor, I’ll be very blunt: you might not want to. If you’re never going to do any system administration or heavy editing of text, and if you don’t want to invest any time in learning the capabilities that Vim has, then learning Vim might not be the best use of your time.

Some people disagree on how many modes Vim actually has. I’m going to define three: insert mode, command mode, and last-line mode. Let’s start with the default mode you’ll see when you start up Vim–command mode.

To enter the insert mode, type i (for “insert”) and now the keys will behave as you’d expect. You can type normally until you want to make a correction, save the file, or perform another operation that’s reserved for command mode or last-line mode. To get out of insert mode, hit the Escape key.

Once you press Escape, you’re in command mode again. What if you’d like to save your file or search through your document? No problem, press : and Vim will switch to last-line mode. Vim is now waiting for you to enter a command like :w to write the file or :q to exit the editor.

If that all sounds complicated, it’s really not. It does take a few days to start training your brain to move between the modes and memorizing the most important keys for movement, commands, and so on. But once you start getting the hang of it, you’ll be surprised by how fluid it is editing a file in Vim. Let’s walk through some of the most common commands that you need to know.


The basic movements of Vim

The first thing you’ll want to learn is how to move around a file. When you’re in command mode, you’ll want to remember the following keys and what they do:

Keep that tip in mind–you’ll find that prefacing other commands with a number can come in handy as well.

The best way to learn is practice. Take a few minutes to try Vim out. If you’re on a Linux system right now, open up a terminal and type vim filename. Enter insert mode and type a bit (or copy some of the text from this article into Vim) and then hit Escape to start practicing movement around the file. Once you feel you’re getting the hang of it, it’s time to try some editing.

Now that you know how to move around a bit, let’s try editing. Move the cursor to the beginning of a word. Now type x. What happened? You should have deleted the character that the cursor was on. Want to undo it? No problem. Type u (for undo) and it will be restored.

Want to delete an entire word? Move your cursor to the beginning of a word again. Use dw. Note that this will only delete the word from the cursor on–so if you have the cursor in the middle of a word, it will only delete from that point on. Again, u will undo it. Note that Vim has multiple levels of undo, so you can undo the change before that and the change before that, etc.

Want to undo your undo? Hit Ctrl-r. That will redo your last undo.

Again, here’s a longer list of the commands you’ll definitely want to know starting out:

You may have noticed that several commands combine a text operation and movement key. gg takes you to the end of a file, and d is used to delete. Combining them gives you something more powerful. Vim’s like that. If you’re working in Vim and think “hey, I wonder if I can combine two things I know to make something easier,” the answer is often (but not always) yes.

Let’s move on a bit and talk briefly about searching and replacing.

If I want to find it again, I hit n. If I want to look for a previous instance of the text, I’ll use N instead, which will search the opposite direction through the document.

That’s all pretty easy, isn’t it? Now to move on to an important operation: Cutting and pasting text.

Vim has a really cool trick as well. You can highlight in columns. Use Ctrl-v and you’ll be able to highlight a column instead of an entire line. This can be useful when working with some text files that have data in columns and you want to select an entire column, but not an entire line.

When you’ve highlighted what you want, hit y and it will “yank” the text into the buffer to be pasted later. So a usual paste operation might look like this:

Hit v to highlight some text. Then hit y to yank it into the buffer. Then move the cursor where you want it, and use p in command mode. There you go–you’ve just pasted some text!

The commands you most need to start out:

You’ve done enough editing for one day and you’re ready to pack it in. No problem. Here’s how you can save the file and quit Vim.

If you’re in insert mode, hit Escape. Then enter : and you’ll see a line at the bottom of the screen with a cursor ready to take input.

To write the file you’re editing, enter w. (So, you’ll have :w.) That will write the file to the existing filename. If you don’t have a filename or want to write out to a different filename, use :w filename.

To quit Vim after you’ve finished, hit :q. Since Vim is your friend, it won’t just pop out on you if you haven’t saved your file. It will say “no write since last change,” and suggest that you add ! to override.

If you really want to quit, go ahead and use :q! to leave without being nagged.You can also exit Vim using ZZ, which will save and quit the file. Again, all this might sound a bit complex, but it really isn’t. It’s a bunch of smaller things to learn that when you add them all up, make for a very powerful package.

For now that should be enough to get you started. Don’t fret, though. We’ll go through more Vim usage next week, and keep working on Vim until you’re an expert.